Climate Justice - What is the story we are telling ourselves about climate change? 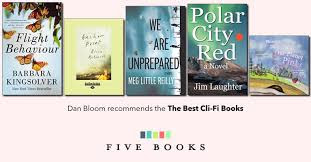 Chapter Nineteen
What is the story we are telling ourselves about climate change?

What does it mean to be entertained by a fictional apocalypse as we stare down the possibility of a real one? One job of pop culture is always to serve stories that distract even as they appear to engage—to deliver sublimation and diversion. In a time of cascading climate change, Hollywood is also trying to make sense of our changing relationship to nature, which we have long regarded from at least an arm’s length—but which, amid this change, has returned as a chaotic force we nevertheless understand, on some level, as our fault. The adjudication of that guilt is another thing entertainment can do, when law and public policy fail, though our culture, like our politics, specializes in assigning the blame to others—in projecting rather than accepting guilt. A form of emotional prophylaxis is also at work: in fictional stories of climate catastrophe we may also be looking for catharsis, and collectively trying to persuade ourselves we might survive it.

In this time of climate warming due to carbon emissions and the resulting climate change, what are the stories that we are telling ourselves about what is happening?

If you look at the movies where the box office hits are based on comic book superheroes and horror films based on robots and space aliens, an observer might wonder what are these projections that the public finds so entertaining that they will spend money and time to watch these scenarios portrayed and told for entertainment and distraction from the unconscious eco-anxiety which has infected the public conscious and unconscious?

David Wallace-Wells suggests that this entertainment is the unconscious projection of guilt, but another hypothesis is that it is a sublimation of fear. Heroes and villains are depicted and creative narrative tension is created which is diverting as we sit in darkened air conditioned theaters eating our buttered popcorn and sipping our sugary soft drinks.

The band is playing and the fiddles are fiddled as Rome is burning. Are there any realistic stories about climate change that help us deal with the moral issues of stewardship for the eco-systems which we inhabit? Flying off to Mars and inhabiting space stations as a substitute for life on planet earth seems childishly fanciful and an abdication of responsibility.

If you are interested in learning more about novels and films that deal with climate change use the search phrase, “cli-fi.”