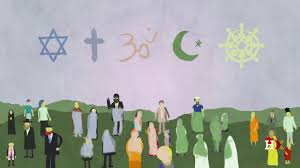 A few years ago I was standing around the photocopier in Boston University’s Department of Religion when a visiting professor from Austria offered a passing observation about American undergraduates. They are very religious, he told me, but they know next to nothing about religion. Thanks to compulsory religious education (which in Austria begins in elementary schools), European students can name the twelve apostles and the Seven Deadly Sins, but they wouldn’t be caught dead going to church or synagogue themselves. American students are just the opposite. Here faith without understanding is the standard; here religious ignorance is bliss.

Stephen Prothero is his book Relgious Literacy observes how ignorant Americans are of religion. I have found this to be true especially of Christians in the U.S. and every more true of Unitarian Univeralists.

That there is a clear weakness in religious literacy among UUs in general seems clear. Today, a new feature is being initiated on UU A Way Of Life which will deal with the religious literacy problem in Unitarian Univeralism and in the country. A good place to begin our study is to name the six sources of the living tradtion of Unitarian Univeralism. How many can you name?

Find the answer in the first comment.
Posted by David G. Markham at 9:39 AM