Lenten Reflections, Day Twentieth, Third Monday Of Lent, Are You Living In The World Of The Ego or The World Of Spirit? 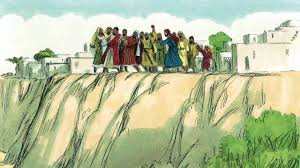 Luke 4: 24 - 30
And he said, “Truly I tell you, no prophet is accepted in the prophet's hometown. But the truth is, there were many widows in Israel in the time of Elijah, when the heaven was shut up three years and six months, and there was a severe famine over all the land; yet Elijah was sent to none of them except to a widow at Zarephath in Sidon. There were also many lepers in Israel in the time of the prophet Elisha, and none of them was cleansed except Naaman the Syrian.” 2
When they heard this, all in the synagogue were filled with rage. They got up, drove him out of the town, and led him to the brow of the hill on which their town was built, so that they might hurl him off the cliff. But he passed through the midst of them and went on his way.

“No prophet is accepted in the prophet’s hometown.” I have observed this phenomenon many times and having sometimes been the prophet myself know that family and friends don’t listen to the things I say, but strangers listen readily and benefit from the knowledge shared.

Jesus refers in the synagogue to the story about Naaman and Elisha in the Second book of Kings, Chapter Five, verses 1 - 19. Naaman was a Commander in the Syrian army and Naaman had leprosy. The King of Syria sent Naaman to Elisha to be healed. Naaman being an outsider brought Elisha money and fine clothes but Elisha wouldn’t take it. Elisha told Naaman to bathe in the river Jordan, but Naaman refused saying he could bathe in his own rivers in his own land. Finally, Naaman’s servants talked him into following Elisha’s advice, he bathed in the river Jordan and was healed.

In telling this story in the Synagogue, the people felt insulted being compared to Naaman. They didn’t like being called pig headed, chauvinistic, and parochial. They were so upset that they tried to kill Jesus to silence Him, but somehow He escaped.

There is danger in upsetting the apple cart, going against the grain, rocking the boat, disturbing the status quo. In the world of the ego people want security, they want to be right, and anyone who disturbs their cognitive consonance will be challenged, marginalized, ostracized, attacked, and silenced.