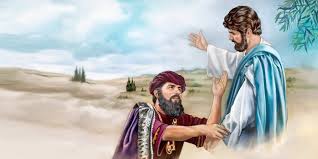 When the two days were over, he went from that place to Galilee ( for Jesus himself had testified that a prophet has no honor in the prophet's own country). When he came to Galilee, the Galileans welcomed him, since they had seen all that he had done in Jerusalem at the festival; for they too had gone to the festival. Then he came again to Cana in Galilee where he had changed the water into wine.

Now there was a royal official whose son lay ill in Capernaum. When he heard that Jesus had come from Judea to Galilee, he went and begged him to come down and heal his son, for he was at the point of death. Then Jesus said to him, “Unless you see signs and wonders you will not believe.”

The official said to him, “Sir, come down before my little boy dies.”

Jesus said to him, “Go; your son will live.”

The man believed the word that Jesus spoke to him and started on his way. As he was going down, his slaves met him and told him that his child was alive. So he asked them the hour when he began to recover, and they said to him, “Yesterday at one in the afternoon the fever left him.” The father realized that this was the hour when Jesus had said to him, “Your son will live.”

So he himself believed, along with his whole household. Now this was the second sign that Jesus did after coming from Judea to Galilee.

Some people might say after reading this story that the moral of the story is that faith heals. Jesus, though, is not a magician. He does not dabble in superstition and the occult arts.

Another interpretation of the story might be that Jesus does not care about the path of the ego. Why would a “royal official” consult an itinerant, homeless, street teacher? Why would someone with status, rank, prestige, power ask a bum for help? It makes no sense on the path of the ego.
The “royal official” was wise enough to be aware that there was something much deeper going on with Jesus and he wanted to get in on it for his son’s welfare. What would make a “royal official” think that someone like Jesus could have something to offer that could help his sick son and his family?

John points out Jesus’ statement earlier that a person can’t be a prophet in his own land. It is only outsiders who see things from a distance, a distance that gives  perspective, who can appreciate the insights and wisdom of someone different from them.

When the royal official asks Jesus for help Jesus laughs and says, “Unless you see magical illusions you folks don’t believe what I am trying to share with you.”

After a good laugh. I imagine,  Jesus sends the royal official on his way and says, “Don’t worry, Your son is going to be okay.”

When the royal official hears from his servants that his son is better, he is overjoyed and credits his son’s recovery to Jesus. The story tells us that the royal official and his whole household became “believers,” but in what it does not say.

Does the royal official and his household become believers in Jesus or Jesus’ message? The story doesn’t tell us.

What is Jesus’ message? What was Jesus’ metaphysical philosophy and His recommended psychology?

Jesus’ metaphysical philosophy is about nondualism and his psychology is about the experience of love.