No, I am not a UU minister 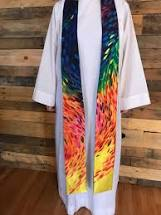 Somebody asked me the other day, "Are you a UU minister?"

I am not affiliated in any way with the UUA or a UU congregation.

I am just an average guy living his life trying to apply the UU principles to his daily activities.

I am not ordained or sanctioned in any way by anybody other than God.

It would be accurate to say, I think I am on a mission from God to help make the world a better place.

So reader, beware. "The proof of the pudding is in the eating" as they say.

I, like Jesus, have no authority, but my own, hopefully as a conduit of God's will and love into the world.

They mocked Jesus and called him "Rabbi" which would be like calling someone in a mocking way "professor" or "pastor."

Jesus didn't care and went on teaching. As you know, He came to a bad end when they killed Him. Many of His early disciples met the same fate of persecution and execution.

So it is dangerous to rock the boat in the ego world and go against the grain and disturb the status quo. This is what John Lewis and others in the Civil Rights era called "Good trouble."

I hope that UU A Way Of Life is a force for good in the world, but that remains to be seen.

No, I am not a UU minister.

Thank you for asking.