The miraculous gift of kindness. 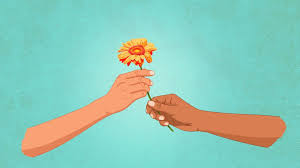 Miracles honor you because you are lovable. They dispel illusions about yourself and perceive the light in you. They thus atone for your errors by freeing you from your nightmares. By releasing your mind from the imprisonment of your illusions, they restore your sanity. T-1.1.33:1-4

In Alcoholic Anonymous it is suggested, in step two, that we come to believe that a Power greater than ourselves can restore us to sanity. The faith of AA is the same as the teachings of the Universalists that a shift in perception from the world of conditional love to unconditional love can restore our sanity..

John had lost everything in his life. He was 55 and going through a divorce a few years after two of his children were killed in an auto crash. The divorce required that the home in which he was living be sold. During this time, he also lost his job because of corruption at his workplace. All these factors contributed to bankruptcy. John said to his friend, Steve, “Steve at my age of 55 I have lost everything, my children, my wife, my home, my job, all my money. What is the measure of a man?” Steve said without missing a beat, “Kindness. Kindness is the measure of a person.”

John felt the weight of his despair lift as he recognized that he had always tried to be kind. In spite of the nightmare through which he was living, kindness had enriched him in a miraculous way. John realized Steve’s regard and love for him and the sense of loss and failure was dispelled by the light which arose within his being. John felt that the crazy times he was living through didn’t matter. John realized that kindness, unconditional love, is the key to sanity.

Today, recognize and acknowledge that we are loved unconditionally by the Transcendent Source that created us. Having been given our lives, who are we to doubt this? Like John be the recipient of and pay forward the miraculous gift of kindness.