Most Christian churches don't walk the talk when it comes to race. 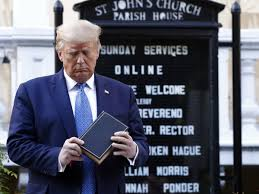 From Christianity Today, March, 2021, Erin Chan Ding, "Returning to religious roots." p.47-48
Emerson, who heads the sociology department of the University of Illinois at Chicago, analyzes this disillusionment in a new book scheduled for release this year, The Grand Betrayal, which he describes as “about white Christians in the US constantly and continually choosing whiteness over brothers and sisters in Christ.”
While conducting research, Emerson and his team asked Christian leaders of color what would help remedy disillusionment among people of color in white-led multiracial churches. He says, “Their answer was consistent, and I think profound, and that is: Notice the problem with the term ‘white-led multiracial church.’ How is that even possible? So the answer is there can’t be white-led multiracial churches. And that doesn’t mean there aren’t white leaders. It means there has to be what they call ‘power sharing.’ It has to be a multiracial team. No church is led by just one person. There’s always a board, there are deacons, there’s a leadership team, whatever it is. It has to be diverse. And it has to be diverse not just in appearance but in actual perspectives.”
..................
Both white Christians and Christians of color have long lamented the racial segmentation of American churches, invoking Martin Luther King Jr.’s line about America’s “most segregated hour.” The maddening challenge for even the most determined multiethnic congregations, however, is that some Christians say multiracial communities are simply uncomfortable and emotionally draining, and so their faith thrives more in culturally homogenous spaces.
For more click here.
Editor's note:
I have added the bolding.
Most Christian churches are based on egocentric and ethnocentric levels of consciousness which are based on exclusionary practices. Unitarian Universalism is based on a world centric and integral level of consciousness in their theology but not in their practice. If you doubt this, attend a UU church and look around and report back what you see. Martin Luther King Jr.'s observation is still true after all these years. And there seems to be little interest in the pews to change this.
Posted by David G. Markham at 7:25 PM

Email ThisBlogThis!Share to TwitterShare to FacebookShare to Pinterest
Labels: Sociology of religion